Its the last day for husband's face catapiller, and I can honestly say that I won't be sad to see it go. In honor of his month long dedication, I have gathered some info on the mouthbrow...

There is a whole line of products designed for the care of one's mustache, including mustache wax, mustache nets (snoods), mustache brushes, mustache combs, mustache condoms, mustache curb-feelers, mustache scissors AND a mustache cup. (The is a drinking cup with a partial cover to protect the upper lip from froth)

There are many thick, rich and delicious mustache styles 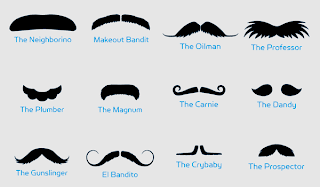 The Dali - narrow, long points bent or curved steeply upward; areas past the corner of the mouth must be shaved. Artificial styling aids needed.

The English - narrow, beginning at the middle of the upper lip the whiskers are very long and pulled to the side, slightly curled; the ends are pointed slightly upward; areas past the corner of the mouth usually shaved. Artificial styling may be needed, especially if you are, actually, English.

The Pancho Villa - similar to the Fu Manchu but thicker; also known as a "droopy mustache"

The Horseshoe - Often confused with the Fu Manchu style, the horseshoe was possibly popularized by modern cowboys and consists of a full mustache with vertical extensions from the corners of the lips down to the jawline and resembling an upside-down horseshoe.

The Imperial - whiskers growing from both the upper lip and cheeks, curled upward

The Moustachio - bushy mustache, with hair sometimes growing down the sides of the mouth.

The Taylor- a thin row of fine dark hairs along the upper lip.

The Pencil mustache - narrow, straight and thin like a pencil, closely clipped, outlining the upper lip, with a wide shaven gap between the nose and mustache.
Office model – favored by middle managers who live in fear of doing anything unusual.

The Toothbrush or Dictator - thick, but shaved except for about an inch (2.5 cm) in the center; associated with Adolf Hitler and Charlie Chaplin.

The Walrus - bushy, hanging down over the lips, often entirely covering the mouth.

The GG - bushy hair grown only over the corners of the mouth, shaved in the middle. 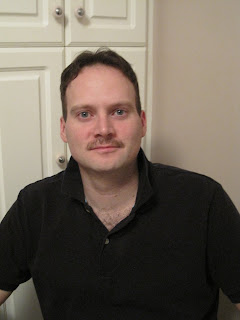