Bakeapples and other Berries 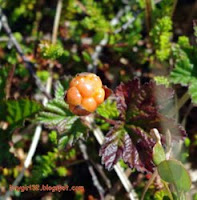 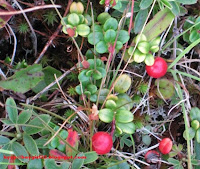 "Buddy, grab your berry box, we're going up on the barrens after the bakeapples and havin a bit of a boil up. By rights we should have headed up there an hour ago."

"Hold your horses would ya. I'm beat out, I was over to mudder's hauling stuff around, and she only give me a bare-legged cup of tea."

Barrens - a plateau with low vegetation where berries often grow.

Bayman - someone who lives outside St. John's. (me, but not my husband)

Beat out - to be tired and out of breath.

Berry box - a wooden box used to transport berries from the berry hills.

Boil up - a meal in the woods.

Buddy - referring to a person whose name is unknown or not easily recalled.

B'y {pronounced; BY} - any male person regardless of age.

By rights - strictly speaking.
Posted by baygirl32 at 9:20 AM