All you need is a button and a deck of cards! 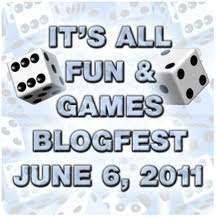 Growing up in a small community in outport Newfoundland, often times you make your own fun, without a lot of equipment. Here are three of my favorite games requiring only a button and a deck of cards.


Button Button
Button button is a children's game often played at birthday parties. One person is the "button holder" while the rest of the group forms a circle around them. Holding the button between the palms of the hands, the button-holder draws their hand down between the unclasped hands of the other players, while pretending to drop the button in each pair of hands. (Sometimes the same pair of hands would get visited more than once.) The button would be left in one pair of hands, but the button holder would continue until they were certain to have deceived the players. The button holder would then return to the center and say "Button Button, whose got the button?" then select someone to guess who had the button. The idea is for the button holder to fool everyone into picking the wrong person. The person holding the button would try to pretend that they didn't have the button, and if successful would have a turn in the center of the ring. If someone guessed correctly, they would then take the centre-ring position.
* If playing this at a birthday party, there were often prizes if no one guessed who had the button.

Red Rover
In this children's game, two teams face each other with a distance of 10 or more feet between them. The members of the team selected to be "up" joins hands to create a barrier. One member of the opposing team is then challenged to try and break through the human barrier by running fast and hard enough to cause a break in clasped hands. The challenge was issued in the following manner: "red rover, red rover, send ____ right over." The called person would then take a zig-zagging run at the line trying not to reveal the intended contact point. If successful in breaking the line they return to their team bringing one of the opposing players with them. If not, they become a member of the opposing team. The game went on until all the members of one team were "captured" by the other.


Growl
The name "growl" is often used to refer to a card game known as Auction 120s, or 120s. This is a team game that is mostly played in a boisterous manner(sometimes shouting or swearing and most often slamming fists, depending on the pot and who you play with.)
The object of each team was t0 get 120 points before the other. Each player is dealt 5 cards and each trick they win gets them 5 points. The persons with the highest card in each deal got 10 points for the trick, making it a total of 30 points per round. The best card won each round and the best cards were trumps. Trumps being the suit of card chosen by the winning bidder. Players can bid between 15 and 30, if the highest bidder got the number of points they bid or more, they kept the points, if they didn't they lost the amount of their bid. If a player felt that with the help of their partner they had enough cards to take all the tricks they would bid 30 for 60. If their team won all the tricks they were awarded 60 points and if not they only lost 30 points. This often meant the team would "go in the hole" or have less than zero points. If this happened when the other team was within a hand of winning the game got more interesting, as the losing team would make impossible bets to keep the other team from winning. The bid "slam for the game" was often invoked as this point. In a "slam for the game" bid, all five tricks had to be won, and if the bidding team did it, they won the game, if not they went another 60 points in the hole. This caused many a growl between the losing partners. So the game got its name honestly.
* Growl is most often an adult's card game, but both my grandparents loved to play and taught my and one of my sister to play when were were still young. I remember playing this nearly ever night with Nan and Pop.
Posted by baygirl32 at 8:51 AM