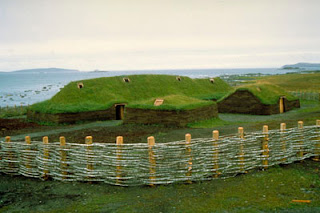 In the past four to five thousand years, many people have lived at L’Anse aux Meadows; some stayed longer than others. Among these people was a small group of Norse sailors. The remains of their camp, discovered in 1960 by Helge and Anne Stine Ingstad, is the oldest known European settlement of the New World.

Today Kiddo is having a frenectomy (surgery that cuts away a piece of soft tissue between her two front teeth - wish us luck) AND husband and I have tickets to see Seinfeld.
Posted by baygirl32 at 6:35 AM