I'm not much liking my yellow hair... its YELLOW, or a variation of yellow anyways. I passed by the mirror this morning, having forgotten what I had done, and did a kind of "what the.." double take, is that me? NO. Couldn't be... The plan now is to wait a few days(until my sister leaves) and then cover it up with a more me shade. BLAH, I am NOT a blonde.... more power to those who can pull it off, I can not.

Easter egg hunt this morning involved a 10 year old plowing through parents, aunt and a dog to get chocolate. Would swear she never saw chocolate before. The bunny did bring cool prizes, my husband has been playing super mario on the wii all day!

I took advantage of the weather and went to Port Dalhousie where I briskly walked the beach for 45 minutes before Tim Horton's lured me in with its promise of fresh happy juice.

10 things I learned about Timmies today: 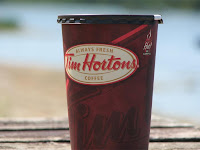 10)Tim Hortons was named after a Toronto hockey player.
9)It is currently the largest franchise in Canada, after surpassing McDonalds a few years ago.
8)The term “double double” found its way into the Canadian Oxford Dictionary in 2004.
7)Tim Hortons was founded in Hamilton, Ontario in 1964.
6)Facebook has at least 6 groups dedicated to Tim Hortons and over 603,000 fans.
5)For 24 years Tim Hortons customers have been rolling up the rim. (since 1986)
4)Half of the money made by Tim Hortons is brought in from their coffee.
3)Tim Hortons holds about 62% of the Canadian coffee market.
2)Over 31 million prizes are distributed each year.
1)Timbits were introduced in 1976.

AND that 2 Tim Hortons within walking distance of my house, and I have yet to win so much as a stupid free coffee in this year's roll up the rim!
Posted by baygirl32 at 5:22 PM