This afternoon kind of got away from me. My mind drifted, and then it got lost.

It started with someone in my class asking if I wanted to go to McDonalds, which made me think of my favorite McDonald's Happy Meal character. 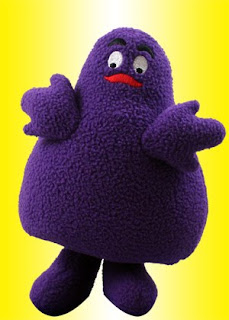 Which makes me think of....

BARBAPAPA! Barbapapa is a creature who could change his into any shape he wanted. He met a Barbamama and they had a bunch of barbababies, 1 in each colour, who all grew out of the ground like plants. Instead of anwsering the McDonald's question, I broke into song.... "they can change their shapes and sizes very easily"


Just in case you didn't know.... Barbapapa’s pink, he’s in the pink, he’s pinker than flamingo pink
Barbamama’s black as night, when it gets dark, she’s out of sight.
Barbazoo’s a yellow fellow,
Barbalala’s very very green,
Barbalib is orange like an orange or a tangerine
Barbabeau is black and also furry But since he always play around with paint, He often looks a colour that he ain’t
Now Barbabelle is deep deep purple,
Barbabright’s true true blue
Barbabravo ? he’s the one who’s redder than the setting sun
That I think is everybody done.

Stupid McDonalds, had to get me going didn't you.
Posted by baygirl32 at 10:39 PM