A few months ago we started talking about getting a Wii for the kiddo for easter, and then we bagan on a Wii treasure hunt. Since Christmas trying to locate one of these things is damn near impossible. So when husband and I were walking through Costco and found a Wii Fit just sitting there, we snatched it up. I was so excited I nearly jumped out of my pants! That would not have been pretty, security would have been called and people would have nightmaress of seeing me pantless, it’s a good thing I walked calmly to the cashier.

We brought it home, and it took all the self-restraint I could muster not to rip into it, after all it was intended as a present, and easter was still a month away.

Well patience is not a strong suite of mine. That Wii didn't last 4 days! When we opened it, we all took the time to make our Mii in our likeness and we played for hours.

Now, if you don’t own a Wii Fit, let me just explain... The first step is to create a Mii character for the Wii Fit to use. My Mii character started out cute and skinny. Then I got on the Balance Board and got my measurements taken... 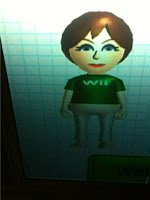 Ouch! Wii fit is nasty! I stood there getting measured, and it seemed harmless. Then I was told to stand still while a little red dot wobbled on a grid. So within 2 minutes of standing on my balance board, I have a pudgy Mii, not great balance... then the Wii pipes up and tells me I'm obese, and the best part, my Wii age is 13 years older than I am in real life.

Well, I'm pretty stubborn, I got back on that Wii every day for an entire month. I started unlocking higher levels in hula hooping, flying like a chicken, and my cutesy little trainer was starting to talk nicer to me. Then I got bored... 14 days, no Wii.

I hopped on this morning, I had perfect balance, I beat my record in meditating, and my Wii fit age is 10 years younger than I really am! My Wii still have love handles and I'm still obese... talk about hard on the ego. Makes elliptical seem friendly.

Not having saw a live person all day, I opted to clean out the closets and the toy box, 2 garbage bags are enroute to the red cross now.
Posted by baygirl32 at 4:36 PM