I'm turning into my mother!

In honour of mother's day, I've compiled a list of phrases frequently used by my mother while I was growing up. As I was writing them down, I realized that I have used about 90% of these when talking to kiddo and husband!


Dawn, get your feet off the counter.
If it had teeth it would bite you.
Ask your father (closely followed by "Ask your Mother")
Who do you think you are?
Bored! How can you be bored?
I'll treat you like an adult when you start acting like one!
Look at me when I'm talking to you.
Did you flush?
Don't you roll your eyes at me!
We’re not doing anything tomorrow, so don’t bother waking up.
Don't pick it, it'll get infected.
Please close your mouth when you chew.
Don't put the chips back in the bowl after you've licked them.
Where are your clothes?
I don't care if "insert friend;s name here" Mother said yes.
You'll put your eye out with that thing!
I hope your kids act just like you!
I'm going to give you to the count to three.
Don't put that in your mouth, you don't know where it's been.
Make sure you wear clean underwear in case you get in an accident.
Dawn, stop hitting your sister when she's sleeping.
Don't cross your eyes like that, one day they'll freeze that way.
I don't care who started it, I'll finish it!
Don't EVER let me catch you doing that again!
Why? Because I SAID SO, that's why!?!
The car is not a garbage can.
If everyone jumped off a cliff, would you jump too?
Good God, why is your room such a mess?
If I catch you doing that one more time, I'll...
If you can't say something nice, be quiet.
What if I spit in your soda?
DAAWWWNNN! (mine is the first name called when something goes wrong)
Your shirt is not a napkin.
How many times do I have to tell you, don't!!
How would you like it if someone stepped on you?
Do you think your clothes are going to pick themselves up?
"I don't know" is NOT an answer!
I know it's not fair. Life isn't fair.
Do you think its just going to fix itself?
I know you love all of the rocks, but we can only take one into the store today. 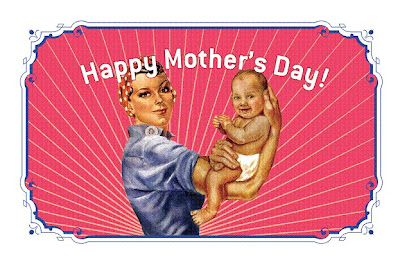 To all mom's, past, present and future...Happy Mother's Day!

If evolution really works, how come mothers only have two hands?
Posted by baygirl32 at 8:34 PM