So last night I went looking for recipes and I found some ideas that made me drool just reading them. Eventually I came across one for strawberry cupcakes with strawberry butter cream icing, ohhhh my taste buds were screaming. I printed the recipe and immediately began cutting and pureeing strawberries while husband was sent to the store for the items a non-baker lacks.

As I mixed and blended, I tried to ration with myself... I haven't had cake in over 2 years, these won't be cake they are mini cake so they will have less calories, I will spend an extra 10 minutes on the treadmill to make up for it. I can see the look of shock on the faces of my cooky classmates who regularly bring in freshly baked items from home to share, kiddo in awe of having cupcakes that don't come out of a box or from a store. I would be a cupcake goddess.

I popped my pinkish buddies in the oven and wished them well, that they would rise up beyond my expectations, while they baked I worked extra hard on the icing following the recipe to the letter, all the while being very strict and not sampling anything.

The cupcakes came out of the oven, and they looked a little 'small' but I didn't let it get me down. The icing was smelling great, and my stomach was now growling for a sample. No. I would stay strong.

Time to ice them, so I called the kid to take over. She heaped the icing on their tops and begged to lick the spoon when she was done. Still no taste testing on my behalf (yeah and nay at the same time). 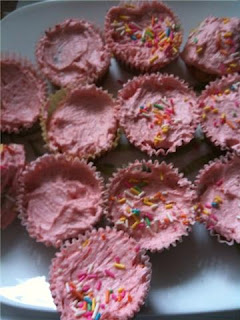 So this morning I get up, I pack a cupcake in kiddo's lunch, two in husband's and then I pile a bunch in a container to take to school. I strut into the lecture hall carrying my container of cupcakes high, proud of myself and awaiting the ohhhs and ahhhs that will surely follow.

My cute little muffins were a flop. Apparently there is something "wrong with my leavening agent" MY WHAT? (English please)... they didn't rise (I thought they looked small) and then there were a bunch of offers to come to my house and teach me to cook (one of which came from the guy in the class who eats ramen noodles 5 days a week). Its a good thing that I learned to laugh at myself years ago..

I get home from class today, walk into the kitchen and then I notice that the remaining cupcakes are nearly gone. Hummm is kiddo tossing them in the garbage? NOPE my kid is loving them, thinks they are some of the best cupcakes I have ever made.. that's it, I'm trying one, they're not awful, but a domestic baking goddess I am not! that's for sure.

Next week I plan to buy some cupcakes, bring them to class and say "just kidding".