coco you're making me nuts 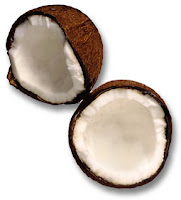 After clinic tonight I had to stop into the grocery store for some milk, and I decided I deserved a treat. So off to the produce section I went(I hate dieting!) It came down to dragon fruit, lychee, coconut or star fruit~ those fruit that are tasty but for some reason or other I never purchase. After much deliberation, coconut was the winner.

I get my coconut home and realize I have NO idea how to open it. On TV the just kind of hack the tops off with a machete, but I don't own a machete. I own a hammer and a screwdriver. See where this is going?

Screwdriver goes into one of the coconut's 'eyes', hammer wields up to knock the screwdriver. Swing. ^&*%#@! Hammer comes down on my thumb, coconut onto the floor, husband laughs.

Now, I recall the reason I don't buy coconuts on a regular basis. When the throbbing calms down and the cussing subsides I'm going after Mr Coconut with a saw, or a stick of dynamite! (unless husband cracks it first)
Posted by baygirl32 at 9:26 PM

Labels: domestic ungodliness, how to annoy me, snacking