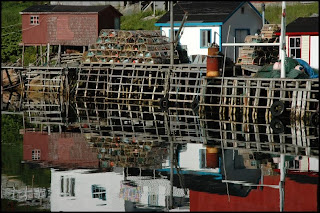 S is for Stage

salt and pepper cap - a peaked hat that it wedge shaped, being slightly taller at the back and lowering at the peak, speckled black and white in appearance

salt box house - a wooden house of one and a half or two stories, with a steep saddle roof

sauce box - an insolent person -> "Would you listen to the mouth on him, what a little sauce box."

savage - angrey -> "Don't get too close to Mudder, she's savage I pipped off school today."

scad - a small amount -> "The snow is scad the past few days, the weather is so good."

scalded - {pronounced: SCAWLED} - made, overcome, licked, beat -> "Go on girl, all the studying you did, you got that test scalded."

scrawny - skinny -> "She's so scrawny if she turned sideways and stuck out her tongue, she'd look like a zipper."

Screech - the brand name for a Jamaican rum bottled in St. John's. (If you ever makes it to Newfoundland, head George Street and get Screeched in.)

scribbler - a covered notebook made with lined, newsprint quality paper

scruff - the back of the neck -> "Mudder was so mad at him, she grabbed him by the scruff of the neck and walked him out the door."

scraggley - a small mis-shaped tree -> "What a scraggley little thing, looks like it come out of a Charlie Brown movie."

seal oil - the oil obtained from rendering seal fat, which was exported and used locally to fuel lamps, make soap and for medicinal purposes.

sealskin - the pelt of a seal with the blubber removed, used for export as well as making clothing footwear and snowshoes

sleeveen {pronounced: slee - VEEN} - a sly a despicable person (another of my favs)

slewed - turned, twisted, crooked or bent -> "You got your cap all slewed backwards."

slop bucket - a bucket with a cover used as a indoor toilet.

snoff - extinguish -> "before you goes to be, be sure and snoff out that fire."

soiree - a social gathering or party

sou'wester - a water-proof fisherman's hat made of oilskin or oil cloth and having a brim all the way around, with a longer brim in the back to keep the water off the fisherman's neck

squid juice - an inky secretion given off by squids to drive away their enemies. When squid are hauled from the ocean on a jigger their defense mechanism is activated and squid juice fies in every direction.

still and all - nevertheless -> "Still and all, she climb up and went again like she never fell."

stogged up - clogged -> "Honey, the kids used too much toilet paper and now the toilet is all stogged up."

streel - an untidy person -> "I looks like a streel, still with my pajamas on and my hair not combed this two days."

stunned - stupid. According to NL comedy group Buddy Wasisname and the Other Fellers, the difference between stunned and stupid, is that there is a cure for stupid, but stunned in incurable -> "Sure that one is as stunned as me arse."

---
This is my longest A to Z post yet, I promise they won't all be this long. There are just too many Newfoundland S words, I picked a bunch of the more common ones and my favorites. Oh, and did I mention I have nothing else to do for a while?! (No hardcore studying until after Easter)
Posted by baygirl32 at 8:32 AM