Today's post is brought to you by the letter F 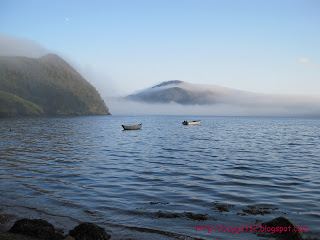 "There's nothing better on a foggy, fallish day than a hot feed of fish and brewis with figgy duff for dessert. Keeps you from getting all farbed up."

Farbed up - confused and not in control

Fatback - a piece of fatty tissue from a pig

Fish and Brewis - a meal of fish accompanied by soaked hard bread served separately on the same plate and covered with scrunchins(fried fatback) and hot, rendered pork oil.

Fog - collection of water droplets suspended in the air at or near the Earth's surface. (pictured above)
Posted by baygirl32 at 7:05 AM