What happens on George Street... 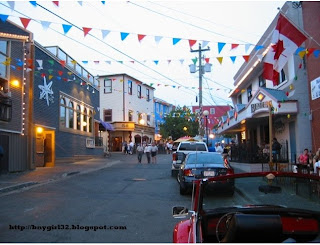 "Go on b'y! Certainly his Misses wasn't giving it out to him because he was down on George Street? I mean, he wasn't gallivanting, he only had one cup of grog and then went right home."

George Street - The short street is populated mainly by bars and pubs and is open only to pedestrians in the evenings and during most of the business day, only being open to traffic from 8:00am until noon, to allow bars to restock their goods. George Street has the most bars and pubs per square foot of any street in North America, and is known to have bars that are open later than most others throughout Canada.

Go on - is that really true?