Zad, zeed and zever, neither of which appealed to me in the least. So I called home... Mudder said Zoo, Fadder said Zebra, and the one sister currently living at home said "I don't know b'y, ask dad." Which brought me back to zebra, there are NO Zebra in Newfoundland, nor do we have a Zoo.

Hummm that (and a couple cups of wine) gave me an idea. What else don't we got? The island of Newfoundland don't got, raccoons, skunks, snakes, deer, porcupine, groundhogs or zebra.


We do have (native to the island) caribou, fox, otters, meadow voles, muskrat, weasels, black bears, beavers, lynx and this guy, the Newfoundland Marten. 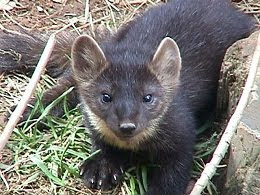