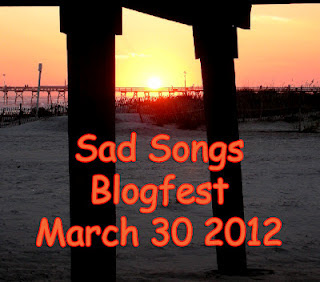 The A to Z Challenge is just days away, but when I spotted the Sad Songs Blogfest on Spunk on Stick's blog, I jumped on board!

The guidelines are pretty simple - List the songs that move your spirit, cut deep into your soul, and threaten to break your heart. - So without any further delay, here are a few of my favorite AND saddest songs (in random order):

2003- Whiskey Lullaby tells the story of a couple who separate, and eventually drink themselves to death. "We found her with her face down in the pillow, Clinging to his picture for dear life, We laid her next to him beneath the willow, While the angels sang a Whisky Lullaby"

2002- A story of addiction and self-destruction that has been covered by any artists over the years. Nine Inch Nails does an amazing job, but I think hearing an aging legend makes it touch a little deeper. "And you could have it all, My empire of dirt, I will let you down, I will make you hurt."

1999 -A cover song found on the No Boundaries - A Benefit for Kosavar Refugees album, Last Kiss tells the story of a young couple on a date that ends in tragedy. "Where, oh where, can my baby be? the lord took her away from me, she's gone to heaven, so I've got to be good, so I can see my baby when I leave this world."

1999 - Originally recorded in 1959 by Lefty Frizzell its the story of a man wrongly accused of murder, but refuses to give up his alibi (a married woman. The Chieftans, and Johnny Cash also do this song very well. "She walks these hills in a long black veil, She visits my grave when the night winds wail, Nobody knows, nobody sees, Nobody knows but me"

1997 - Story of a heroin overdose, but can be interpreted many different ways.
"Spend all your time waiting, For that second chance, For a break that would make it okay"