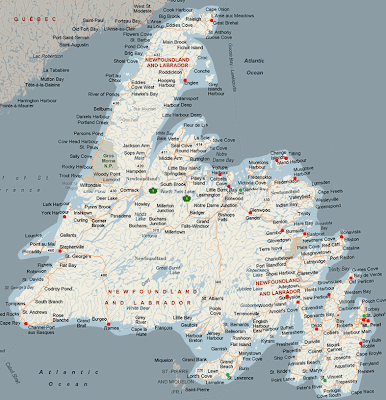 Ok, I'm cheating a little bit. Newfoundland does not have once community that begins with the letter X. Instead, here are some X-citing facts about Newfoundland....

Has 31 provincial parks and reserves

Has the oldest street in North America

Has the most pubs per square foot in Canada

Hosted more than 40 pioneering transatlantic flights between 1919 and 1937 (pilots such as Amelia Earhart, Charles and Anne Lingbergh, Wiley Post, and Harold Gatty)

Was the landing point for the first successful transatlantic telegraph cable, at Heart's Content in 1866

Is home to more than 20 species of whales and dolphins

Is pronounced by Newfoundlander's as NoufinLANd (kind of, depending on how fast you are talking, what part of the bay you are from and how many beers you have had to drink)
Posted by baygirl32 at 7:18 AM

Labels: a to z challenge, Newfoundland