W is for Wishbone Wishes 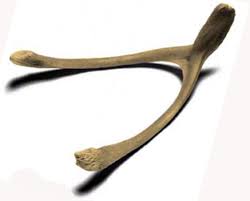 A wishbone can be described as "the V-shaped bone above the breastbone in most birds consisting of the fused clavicles."

After a meal of turkey, my grandmother would always take the wishbone form the carcass and lay it to dry in the hot oven (what she called the top portion of our old wood stove).  When the wishbone was dry, it was given to two people to pull apart until it cracked and broke into two pieces, each person made a silent wish while pulling.  The goal was to get the 'long half' of the wishbone so your wish would come true.  If the wishbone broke evenly, both would have their wishes come true.  (Provided the wish was kept secret, if you told anyone it wouldn't come true of course.)