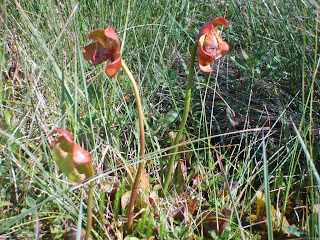 parlour - the innermost part of a lobster trap

partined off - divided by a wall or partition, partitioned

partridge berry - the mountain cranberry or lingon berry. These berries are very popular because of their abundance and have been made into jams for years, although it takes lots of sugar to make palatable, its a great accompaniment to turkey. pictured here

pease pudding - split yellow peas boiled in a cloth bag along with Jigg's dinner. Butter and pepper are added before served

periwinkle - a snail like saltwater mollusk, also referred to as a winkle

pinnicle - a jutting point on the top of an iceberg

piss pot - an impolite term for a chamber pot

pitcher plant - Although it was not declared the provincial flower of Newfoundland and Labrador until 1954, this strange plant appeared on the new Newfoundland penny during the late 1880s. The Pitcher Plant is found primarily in bogs and marshland throughout the province. It has one large wine-red flower with a red and gold centre and hollow pitcher-shaped leaves which are attached to the base of the stem. As an insectivorous plant, it feeds off the insects which become trapped inside the leaves when they fill with water. Pictured above.

plait - a length of hair that has been braided

porch - a room on the main level of a house, usually at the rear, through which people enter and exit, and used for storage of items including firewood, and winter footwear

puffin - an auk with a brightly coloured beak inbreeding season. They breed in large colonies, nesting in burrows or crevices, they mate for life. With its orange beak and yellow bill, it is often called the parrot of the sea. Its black cape has also earned it the name 'parson bird'. It is Newfoundland's provincial bird. Interesting fact, puffins poop is orangish red (if you've ever gone a whale and bird tour, you have perhaps been used a puffin's target

punt - a small round bottomed boat between 20 and 25 feet in length that could be rowed, sailed or sculled

purity - Purity Factories is a Newfoundland company since 1924, they are the ones responsible for Peppermint Nobs, candy kisses, flavoured syrups, jam jams and hard bread.

-----
*sorry no blurb today, just a huge assortment of P words. My mind is on a different P word... Pass! Its my big OSCE at school, the last hurdle before they let me graduate. Wish me luck (I need a minimum of 70%)